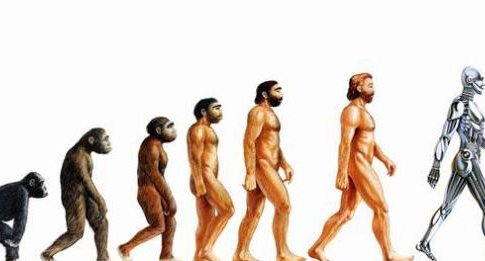 I usually don’t talk much about the future. That’s because there are two kinds of futurists, those who don’t know and those who know they don’t know! But finally I can see that something extraordinary is happening today which is providing a clearer picture of tomorrow. If we don’t face up to it we are going to get left behind.

We are on the brink of the 4th industrial revolution, what founder and chairman of the World Economic Forum, Klaus Schwab calls nothing less than the transformation of humankind. Make no mistake this is a revolution that will change the way we live and work. You can see the beginnings in that little device in your pocket: ubiquitous, mobile supercomputing. You can see it in artificially-intelligent robots, self-driving cars, neuro-technological brain enhancements, genetic editing, and a reality TV talk show host with an extreme comb-over, who is now leader of the free world. The evidence of dramatic change is all around us. And it’s happening at exponential speed.

The decline of labor

To understand how this affects work, look at how it already has. In 1990 Detroit was the planet’s economic juggernaut, producing more cars than anywhere else. The top three companies had revenues of around $250 billion. In 2014, Silicon Valley was the new economic power house. The top three companies produced about the same revenue as Detroit in 1990. But here’s the kicker – while the top three in Detroit employed 1.2 million people, the top three in Silicon Valley employed just 137 000 – 10 times fewer! Automation and digitalization have radically reduced the need for labor and will continue to do so.

It’s become a platitude of corporate speak but no word better describes the corporate zeitgeist than disruption. Established industries are being shaken up by nimble startups who are quicker to respond to changing currents. It’s easier to turn a speed boat than the Titanic. But even that speed boat may not stay afloat. In the 1920’s the average lifespan of an S&P 500 company was 67 years. Today it’s just 15.

The list of winners has become a chorus, speakers chant at corporate conferences. Airbnb, the biggest accommodation company that owns no property, Facebook, the world’s most popular media company that produces none of it’s content, and of course Uber, the biggest taxi company that owns no taxis. If you pity all those taxi companies that Uber put out of business, spare a thought for all the Uber drivers who will lose their jobs to self-driving cars. Change that used to take a generation now takes less than a decade. And it’s not just Uber drivers. According to Klaus Schwab, within the next ten years, 30% of all corporate audits will be performed by computers.

The end of death

We don’t realize how fast the world is changing because it’s happening all around us. Just like the earth. We don’t feel it spinning at 1600 km/hr, because we’re moving with it. So how fast is change happening? Where companies generally grew at a linear rate, according to computer scientist, Ray Kurzeil, today they can grow exponentially.  What’s the difference? Take 30 steps linearly you get to 30, take 30 steps exponentially and you get to a billion!

No wonder Kurzweil and others believe at the current rate of progress in 2025 computers will become more powerful than humans, and within a couple of decades after, we could crack aging and death. Sound like a crackpot theory? It was on the cover of a Time Magazine article: “2045: The year that man becomes immortal.” Just think about it. All you need to do is eat healthily and exercise till 2045 and you could live forever!” Okay, I wouldn’t bet on it, but why does progress continue to accelerate at such an unbelievable speed?

To understand progress today, you need to understand Moore’s Law – the doubling of computing power every 18 months. Gordon Moore made that observation in 1965 when he realized that the number of transistors per square inch of integrated circuit had doubled every year. That’s not quite true any more but data density has continued to double. Now in the early year’s of Moore’s observation doubling might not have meant very much but every year it means a whole lot more. To see what continual doubling leads to, fold a piece of paper in half. Not so impressive. But if you could fold a piece of paper 42 times how far do you think it would stretch? You would have a tower that would go to the moon. Fold it 103 times and it would be as thick as the universe! That’s exponential growth and that’s what’s happening to computing power as we speak.

Combine all that power with internet enabled crowd sourcing – that’s the ability to leverage the resources of almost anyone on the planet with a computer connection – and you see why in just five years Uber became more valuable than Delta Airlines. “Give me a lever long enough and I’ll move the world,” said Archamedes. That lever is the internet. Uber doesn’t pay for all those cars. Facebook certainly doesn’t pay us for our latest status update, but we’re building their business. No wonder that the companies at the heart of this tech boom are growing the fastest.

Just last week the CEO of one of South Africa’s top four banks told me that his biggest fear isn’t another bank, its Apple, Google, Amazon and Twitter who all have, or are starting to offer payment services.

With accelerating computing power and interconnection, it become even harder to say what is going to happen next. Who knows exactly what increasingly connected human intelligence working with even greater artificial intelligence will create? Elon Musk and Stephen Hawking believe that computers could take over and decide that the world would be better without human intelligence. I’m more optimistic that we won’t be murdered by a Frankenstein creation.

What ever happens in the end, management theorists like to describe the new world we live in as VUCA – volatile, uncertain, complex and ambiguous. The term was created by the US Army War College to describe the world that emerged at the end of the Cold War but it is even better suited to the world we live in today. You only have to look at the rand to see volatility, the state of our politics to see uncertainty. Try sell a product in a world of TV, print, billboards, Facebook marketing, Google Adwords, Twitter …. and complexity will become your constant companion. As for ambiguity, just look at the various explanations for our stagnating growth.

Does that mean all we can do is throw our hands in the air and accept that the winds will blow as they may? Not at all. There is much we can do. In Norway, they have a saying: “There is no such thing as bad weather, only bad clothing.” Perhaps it is not a coincidence that Norway is ranked as the best place in the world to live. With an attitude like that even living in sub zero temperatures won’t stop your success.

The solution? Wake up to reality. In Zulu, Vuca – spelled Vuka – means “Wake Up”. Here is how to wake up and deal with it.

The joke is we need a one handed economist because economists generally tell us on the one hand the economy could rise and on the other it could fall. We need to prepare for either. Resilience is more important than prescience. Make sure you have a rainy day fund. Don’t be fooled by job security. Be the best that you can be and there will always be a place for you. When tough times come, as they will, embrace them as an opportunity to learn and grow. Adversity is the way life educates us.

You’ve heard it before – change is inevitable – except from a vending machine! What isn’t inevitable is our response. It’s widely thought that that Charles Darwin said the fittest will survive. Actually he said: those who are most responsive to change will survive. I say those who lead change will do more than survive, those are the ones who will thrive. I don’t know why change has become such a swear word, if tomorrow always looked like yesterday, life would bore us to tears. There is no certainty, just adventure!

There are multiple variables. We need to experiment with different options and be ready to fail. As they say in Silicon Valley, Fail fast and fail often. Actually there is no failure – only feedback! Besides, as Bill Gates says: “Success is a lousy teacher, it seduces smart people into thinking they can’t lose.” If you do lose, as the the Dalai Lama says: “Don’t lose the lesson!”

Beware of anyone who claims to know the whole truth, particularly about the future. The Economist, the world’s most respected publication on the economy, never predicted the 2008 financial crash. Yet few would dispute the value of the perspective that it offers. In an ambiguous world, value is not in knowing the truth but in the depth and richness of your perspective. It is rarely one person who can offer this. The wisest person in the room, is the room. Don’t just use your brain, use all the brains you can borrow. The most intelligent people are the most socially intelligent. They are the ones who are able to leverage the intelligence of their network.

If you’re concerned about VUCA’s tempestuous currents, forget about predicting the next storm rather build a better ship!

This article is based on Justin Cohen’s new presentation: Are you future fit? Justin is a bestselling author and international speaker. For more information go to www.justinpresents.com